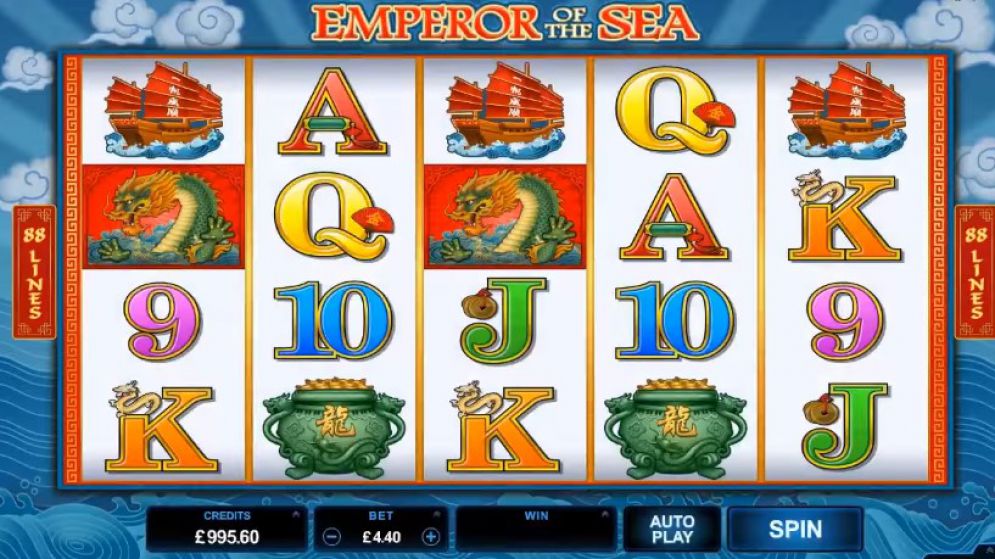 Emperor of the Sea is a Microgaming slot with an Ancient China theme, and it features 88 paylines, and free spins with Rolling Reels and Growing Wilds. Win up to 425,000 coins!

Best Casinos to Play Emperor of the Sea for Real Money : 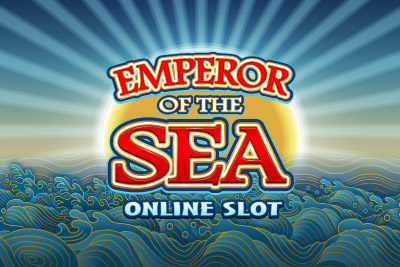 After playing Emperor of the Sea for a few hours I can give you my detailed opinion on it, so let’s see what makes this slot special and is it worth playing or not. Theoretical return to player (RTP) is 96.28%, which is good enough and it means the game isn’t here to rob you of your money. Variance is medium, though the paytable contains three good high-value symbols as well as a paying Scatter with a great prize. However, most of the wins in this game will come from free spins because there you get Microgaming’s well-known feature Rolling Reels as well as Growing Wilds. The game is actually very pleasant to play as it found the right balance between frequency of wins, variance, and the potential to pay big.

The game is played on a large 5×4 board that, interestingly, has 88 paylines to further symbolize that it’s a Chinese themed slot. Bets per spin can range from $0.44 to $44, and you simply choose your bet my moving the slider, as this is a slot game that’s designed with a mobile-first approach so everything is simplified. This makes Emperor of the Sea a classic slot that’s designed for mobile play. 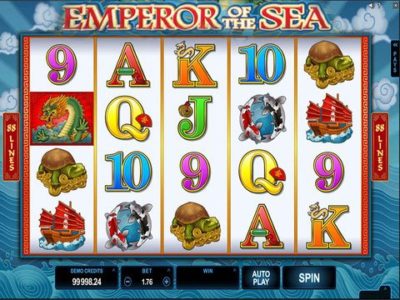 There are ten symbols in the game, divided into two groups. Card symbols are the low-value symbols, and they don’t pay much but are not insignificant either, and the five main symbols all have artwork that depicts life on sea in ancient times in China. They pay rather well. We could say that the paytable is gradual as it progresses from low to medium and then to high wins, and no symbol stands out as significantly more powerful than the others. Dragon, Pot of Gold and Turtle all pay well. Wild is a paying symbol that pays roughly the same as these three, and the Scatter pays almost 10 times better and is by far the best symbol in the game.

Graphics are alright, and Microgaming decided to use a theme which resembles drawings we now have from Ancient China, though the card symbols seem totally out of place in this theme. Emperor of the Sea won’t win any awards for graphics, but the theme still successfully depicts life at sea in Ancient China. There’s a Sea Dragon too, of course, which you get to meet on your seafaring exploits.

Three or more Scatters will trigger the free spins game with 8 free spins, and the bonus from landing four or five Scatters will come from a huge coin win. The free spins feature Rolling Reels and Growing Wilds, so this explains why there’s only 8 of them. I’ve found the feature to be quite rewarding. More often than not, it will leave you with a satisfying win.

Rolling Reels is a commonly used feature in Microgaming slots, and it collapses the winning symbols before replacing them with new ones, giving you a re-spin whenever you land a winning combination. This is aided by the Growing Wilds, a feature in which Wilds grow by one Wild per spin for a maximum total of 16. These two features make the bonus round something you’ll wish to trigger as often as possible, as it’s much better than most bonus rounds in classic slots. With a little bit of luck, if you trigger the free spins game several times in a short playing session, you’ll get to walk away with a nice profit.

Emperor of the Sea is a special little game as it lets players get a classic slot experience that-s fully optimized for mobile play, and adds a very fun free spins game with Rolling Reels and Growing Wilds on top. All that with 88 paylines. The game deserves a few spins so go ahead and try it out, especially if you’re into Chinese themed slots, classic slots, or both.

Emperor of the Sea is a Microgaming slot with an Ancient China theme, and it features 88 paylines, and free spins with Rolling Reels and Growing Wilds. Win up to 425,000 coins!

Hurray! There is a competition going between users of our site!
You have to do nothing, but browse out site, and win a daily prize. Click here to read more.
You current ranking:
Time Left: 2h 57m 32s