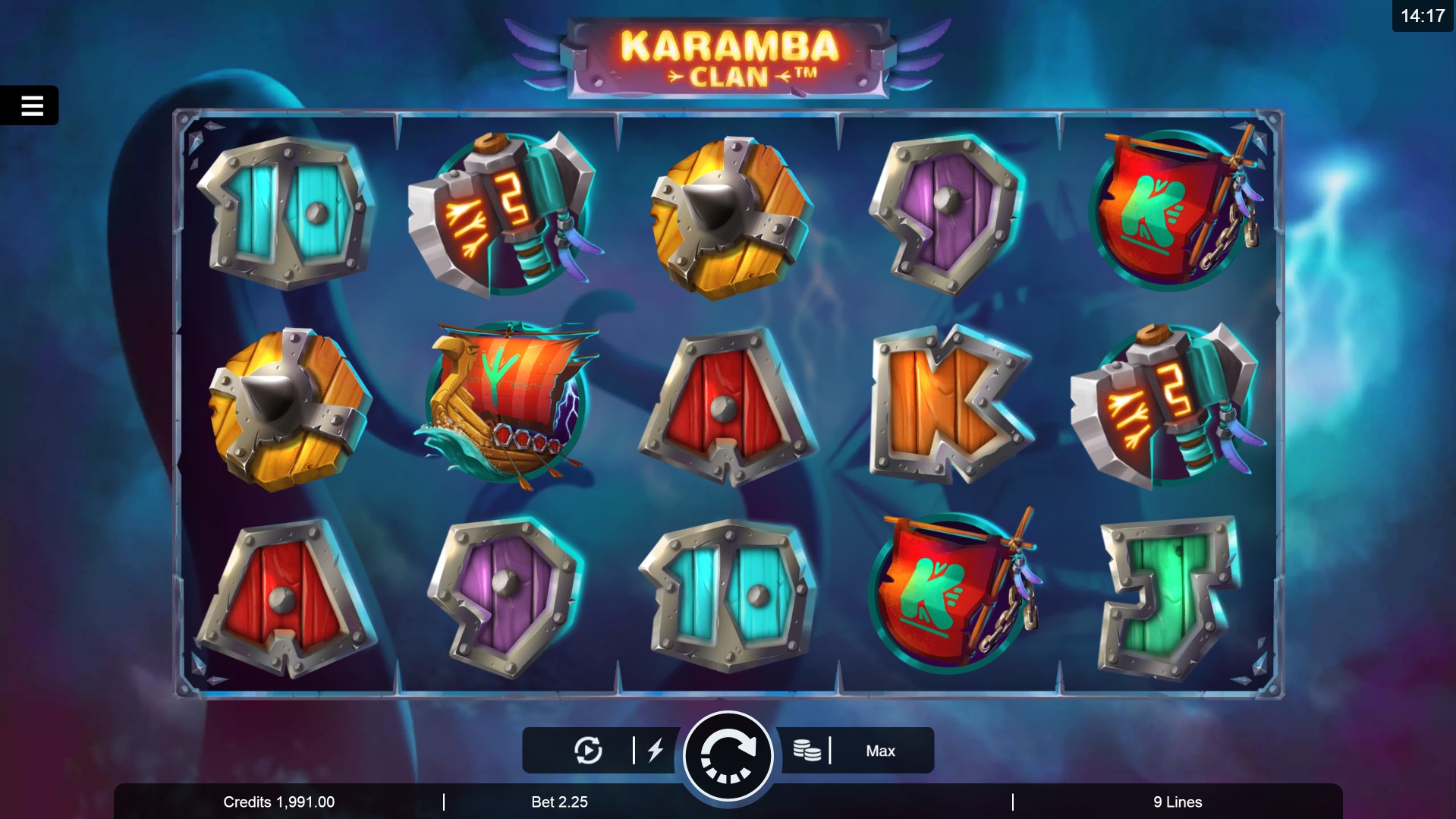 Karamba Clan is a modern slot game that follows all the traditional guidelines, and it has 9 paylines, paying Scatters and paying Wilds, and a free spins game during which all wins are tripled. Wilds further double all wins during the feature. Free spins are the only bonus in the game but a powerful one.

The game is played on a standard 5×3 board, but with only 9 paylines. That means the minimum bet per spin is very affordable at €0.09 while the maximum possible bet is €36. The game uses coins and not absolute bet per spin to calculate winnings, but experienced players will have no problem reading the paytable. 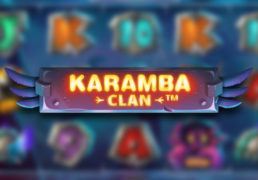 Apart from Wild and Scatter, there are 11 symbols in the paytable, and 6 of these are low-value card symbols. Only the Aces can get you your stake back for three-of-a-kind while the lower card symbols can only give half of it back, but already for four-of-a-kind the prizes get generous. The card symbols will pay either 25 or 50 coins on a 9 coin bet, which is excellent, and for five-of-a-kind it gets better – but not progressively better – with prizes of 100 or 125 coins.

The five high-win symbols follow a natural progression towards the maximum prize of 750 coins, which is slightly more than 83x your bet, and you’ll get that for landing five Galleons. The maximum prize for four-of-a-kind in the game, at least as far as normal symbols are concerned, is only 100 coins.

This is one of those games in which paying Wilds and paying Scatters are the best symbols. For landing five Scatters you’ll get 4,500 coins or 500x your bet, and for five Wilds you’ll get 10,000 coins or more than 1100x your bet. It’s nice to see a game that can pay so many coins from so many different directions. 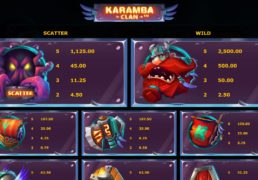 Three, four or five Scatters activate the free spins, and all wins are tripled during the feature. You’ll get 15 free spins regardless of the number of Scatters, as is usual in those games where Scatters give cash prizes. During the free spins game, any win that involves a Wild symbol doubles your win so it will be 6x better than in the base game, and that means the maximum prize per payline rises from 750 coins to 4,500 coins. The potential to win big in the free spins game is definitely present. If you land five Wilds you will get 30,000 coins as Wilds don’t multiply themselves so only the x3 win multiplier applies.

Karamba Clan has a theoretical return to player (RTP) of 96.10%, and that’s very good for Microgaming and is good enough for a modern slot game. Most of the big payouts are in the free spins game, although the base game can also pay well if you’re lucky. What’s important that the paytable can produce big wins, so it can happen in the base game, it’s just that Karamba Clan has high variance so it’s rare.

Karamba Clan is a good slot game for those players who enjoy classic game mechanics but would like to play a game with a modern theme that looks good on mobile devices too. Karamba Clan will undoubtedly be a success as it’s a quality game. It will mostly be played by classic slots fans, though many modern players will jump on it as well. A high variance game with a powerful paytable and a free spins game during which win multiplier is x3 or x6 – what more can you ask for? Play this game for real money at one of many Microgaming casinos out there.

Karamba Clan is a modern slot game that follows all the traditional guidelines, and it has 9 paylines, paying Scatters and paying Wilds, and a free spins game during which all wins are tripled. Wilds further double all wins during the feature. Free spins are the only bonus in the game but a powerful one.

Hurray! There is a competition going between users of our site!
You have to do nothing, but browse out site, and win a daily prize. Click here to read more.
You current ranking:
Time Left: 16h 12m 36s