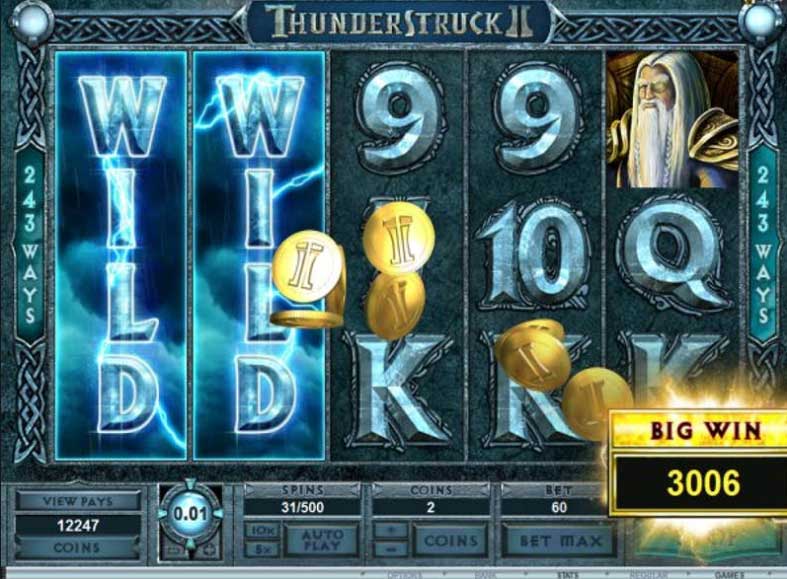 Microgaming as one of the most prominent names in the industry is well-known for their high-quality games and their Thunderstruck 2 slot is no different. This game inspired by the rich Norse mythology comes packed with 5 reels and 243 paylines. With this massive number of paylines, players get to enjoy plenty of winning opportunities […]

Microgaming as one of the most prominent names in the industry is well-known for their high-quality games and their Thunderstruck 2 slot is no different. This game inspired by the rich Norse mythology comes packed with 5 reels and 243 paylines. With this massive number of paylines, players get to enjoy plenty of winning opportunities throughout their Thunderstruck 2 gameplay. The game was released back in 2010 and it is the very much improved sequel to the original game of the same title. 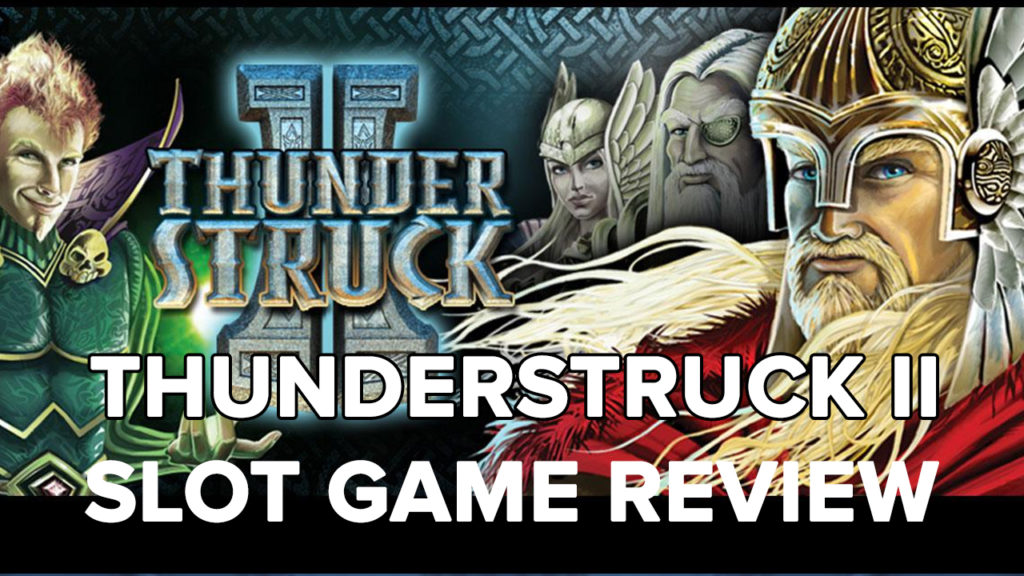 Thanks to its impressive visual solutions and lucrative bonuses, the game shortly after its release became one of those iconic games. This is not surprising at all as Thunderstruck 2 in addition to being beautifully rendered also offers lucrative bonuses and generous payouts. As mentioned, the game is inspired by the rich Norse mythology, as players can definitely expect some mythical prizes coming their way. 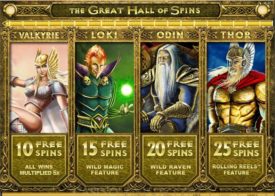 ithout any doubt, Norse mythology is one of the most interesting ones, so there is no wonder why Microgaming was inspired by its borrowing its characters for their Thunderstruck sequel. The original game was released six years prior to its sequel enjoying a massive popularity. However, with highly enhanced graphical solutions, Thunderstruck 2 started enjoying even more popularity than its predecessor.

As expected from Microgaming, the game comes packed with top-notch graphics and stunning visuals. In fact, the game’s developer did an amazing job with the game. They carefully balanced out a very dynamic gameplay with innovative bonus features and awesome graphics and sounds. Unlike its predecessor, Thunderstruck 2 offers more striking graphics with a more detailed theme. As expected, the game’s reels are packed with various Norse gods such as Thor, Odin, Valkyrie, and Loki.

There are also other symbols related to the theme of the game such as Viking ships, Thor’s hammer, Thor’s home as well as standard playing cards which are the game’s lower-valued symbols. The game’s reels are crafted to look as they are carved in massive stone plates. The game’s background depicts also some kind of stone pattern with different shades of blue and grey added. In order to round everything together, the game’s developer added a mythical, epic soundtrack which plays in the background. 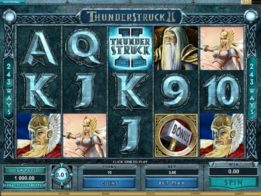 Just as its predecessor, Thunderstruck 2 comes packed with a Wild symbol. This symbol represented by the game’s logo has a power of replacing for regular symbols on the reels. It means, they help players score more winnings completing their winning combos. It should be noted that these Wild symbols do not apply during the game’s WildStorm mode. This mode is triggered randomly during the base game. It earns players one Free Spin with up to five Wild Reels.

In addition to this lucrative bonus mode, the game is also packed with another bonus, the Great Hall of Spins mode. This bonus feature comes packed with plenty of Free Spins with an interesting multi-level aspect. In order to trigger this mode, players need to land three or more of those Scattered Hammer symbols in any position on the reels. There are four different levels added to this bonus mode. These are triggered by getting into the game a specific number of times.

The first level of the Valkyrie mode activated on the first to fourth bonus feature triggers. This Free Spins mode brings players 10 Free Spins with a great 5 times multiplier applied to their Free Spins winnings. Those lucky players also get to re-trigger this mode. Then, there is the Loki Free Spins feature activated from the fifth to ninth mode triggers. This mode awards players 15 Free Spins in addition to the Wild Magic Feature. This specific bonus mode transforms middle reels symbols into extra Wilds. 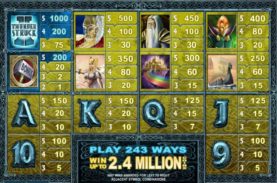 Then, there is the Odin Free Spins mode. It is accessible from the tenth to fourteen mode triggers. This one gets players 20 Free Spins in addition to the Wild Raven mode. This extra mode added randomly turns symbols into 3x or 2x multipliers while getting two of them brings an amazing 6x multiplier. And, there is the Thor Free Spins mode. This one awards players 25 Free Spins alongside the Rolling Reels. With this modifier, those consecutive winnings increase the player’s multiplier from two to five times.

Triggering all of these four different Free Spins levels brings extremely generous winnings. Despite the fact this is a medium variance game, it definitely can produce some generous winnings. Moreover, those extra modifiers added to the game’s Free Spins mode also can bring a massive return. Considering this, Thunderstruck 2 is definitely worth a spin or two.

Microgaming as one of the most prominent names in the industry is well-known for their high-quality games and their Thunderstruck 2 slot is no different. This game inspired by the rich Norse mythology comes packed with 5 reels and 243 paylines. With this massive number of paylines, players get to enjoy plenty of winning opportunities […]

Hurray! There is a competition going between users of our site!
You have to do nothing, but browse out site, and win a daily prize. Click here to read more.
You current ranking:
Time Left: 2h 1m 47s