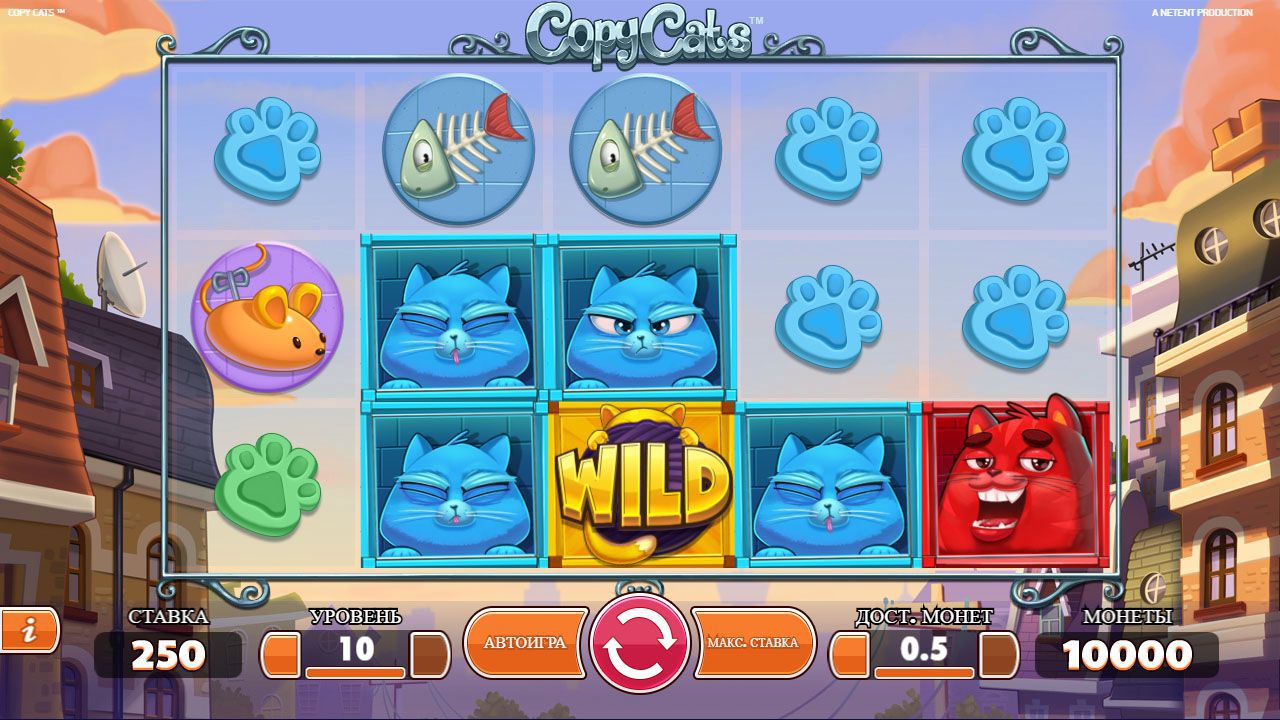 Copy Cats is a NetEnt low variance slot machine from 2017 in which all Cats on your reels can transform into the same symbol! There is also a free spins game with 10 free spins. 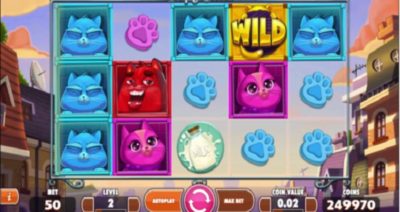 Copy Cats is one of the slots I play often, and I’ll share with you the reasons why. While it may seem this is just a fun slot, it’s actually a serious one that pays well and that is easy to play. Theoretical return to player (RTP) is 96.76%, which will satisfy all but the most demanding players, and variance is medium to low. This means the game pays well and the small winnings will keep you in the game for a long time, especially as the main game can be rewarding because of the titular Copy Cats Feature.

The game issues wins often enough, and you won’t go deep into negative if you play for a while, but any kind of huge win is absent from this game. Even the biggest wins aren’t life-changing, and this is a low variance playing experience that will suit the players who are looking for that. If you want to have a chance of winning big, then Copy Cats isn’t the right slot machine for you.

The game is played on a 5×3 board with 25 paylines. There are three paying Cat symbols of different color, and they are very important for the game as they can trigger the Copy Cats Feature. Whenever your reel 1 has three same Cats – and Wilds can substitute – the Copy Cats Feature will activate. It will transform all other Cats on the reels to the one on your reel 1, and you can really score a big win with many winning paylines completed. 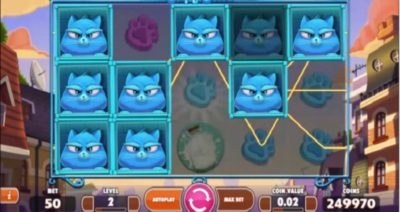 The four Paw symbols are the low-win symbols, and Fish, Milk and Toy Mouse represent the middle portion of the paytable, so there are a total of ten paying symbols. In addition to them, there is also a Wild, and a Scatter. No member of the paytable can pay big, because this is a slot game in which you’ll often have multiple winning paylines in a single spin.

Graphics of the game are excellent, as although everything is cartoonish it was done in a superb visual style. Cats of different colors look great, and so do other symbols. This kind of graphics is typical of NetEnt, and the ability to produce themes such as this one distances them from many other developers. 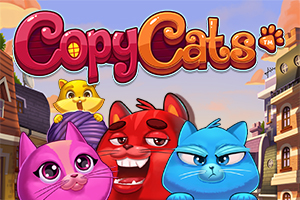 Although I wouldn’t have been surprised if the Copy Cats Feature was the only feature in this slot game, there is also a free spins game here. Cat Bell Scatter only appears on reels 1, 3 and 5, and you need to land all three of them in order to trigger the free spins game where you’ll get 10 free spins. This bonus round was a bit disappointing as there’s nothing added to the spins, they’re just spins that are free. All the best wins will be won during the main game in Copy Cats, and these free spins is just a welcome break from paying for each spin, nothing more than that.

While the free spins feature is a disappointment, it’s there at least, and it also means that almost the entire payout is right there in the main game. It’s all about landing those three same Cats on reel 1 and hoping that a lot of Cats land on reels 2 through 5 on that same spin. This is a low variance game in which you’ll be winning often and that will keep you occupied for a while. This isn’t necessarily just a game ffor cat lovers, but also for those who are looking for a low variance game that doesn’t cost a lot of money to play as it lets you win often.

Copy Cats is a NetEnt low variance slot machine from 2017 in which all Cats on your reels can transform into the same symbol! There is also a free spins game with 10 free spins.

Hurray! There is a competition going between users of our site!
You have to do nothing, but browse out site, and win a daily prize. Click here to read more.
You current ranking:
Time Left: 5h 42m 34s