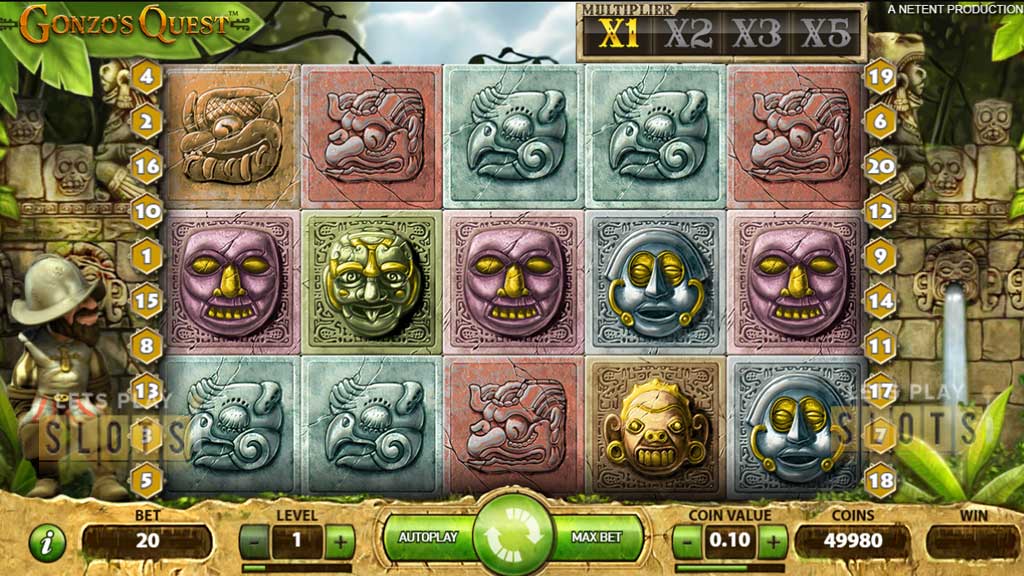 Gonzo’s Quest is a legendary slot game by NetEnt, one of the best slots ever made. It’s a falling blocks game with a progressive multiplier of up to x15, and you can win almost $100,000 on a single spin! 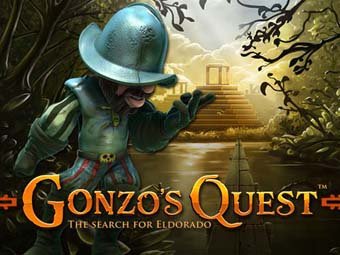 Gonzo’s Quest is one of the most popular slots of all time, it was released by NetEnt in 2010 and it remains a firm player favorite, it’s still played today and its popularity shows no signs of waning. The story of Gonzalo Pizzaro is used as a theme for the slot game, and it’s still fun to see Gonzo beside your reels. The slot game was released in 2010 and I’ve played it a lot, and had a longer playing session now to be able to write this review and give a detalied opinion about Gonzo’s Quest.

The Avalanche Feature is responsible for all the fun. Every time you land a win – and the wins are formed with traditional paylines and not clusters of any sort – the winning symbols will explode and new ones will fall down into vacant positions. If you land another win with the new setup, the winning symbols will again explode and every time this happens the win multiplier will increase. It can go up to x5, and for that you’ll need to win three times in a row on the same spin.

There are only seven symbols in the paytable, which is part of Gonzo’s Quest appeal, and the paytable is a gradual one where the three low-paying symbols are pretty much insignificant, and the four high-win symbols pay progressively better and better, starting with 250 coins for five-of-a-kind and ending up with whopping 2500 coins. In general, in Gonzo’s Quest you need to land five of the same symbol in order to get a significant win, and the smaller wins will just keep you going. Win frequency in Gonzo’s Quest is 41%, so you’ll win on slightly less than half of your spins in average. Theoretical return to player (RTP) is 96.00%, which is decent, and variance is medium but the slot game still lets you win a huge amount of money without feeling like a high variance slot at all. All this combines into a perfect slot game experience. 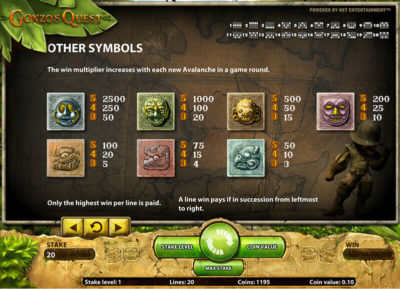 If you land three Free Fall Scatter symbols on the board, you’ll enter the Free Falls game where you’ll get 10 free spins – or free falls. During this feature the Avalanche win multipliers are tripled, so they can go up to x15 instead of x5. Variance is a bit high during this feature, which is exactly what the players want, and it’s not certain you’ll leave Free Falls with a giant win. But you just might, there’s a chance of that if you get to the x15 win multiplier and then get a big win. The maximum possible win with that multiplier is $93,750.

Gonzo’s Quest is still a quality game, and it still ranks well when compared to more modern slots. It still makes sense to play this slot because of interesting gameplay and a chance to win big during the Free Falls. There’s nothing short of perfect about this slot, and it remains one of the best slots ever made. If by any chance you’ve never played it, make sure to do so at the earliest opportunity.

Gonzo’s Quest is a legendary slot game by NetEnt, one of the best slots ever made. It’s a falling blocks game with a progressive multiplier of up to x15, and you can win almost $100,000 on a single spin!

Hurray! There is a competition going between users of our site!
You have to do nothing, but browse out site, and win a daily prize. Click here to read more.
You current ranking:
Time Left: 5h 43m 16s