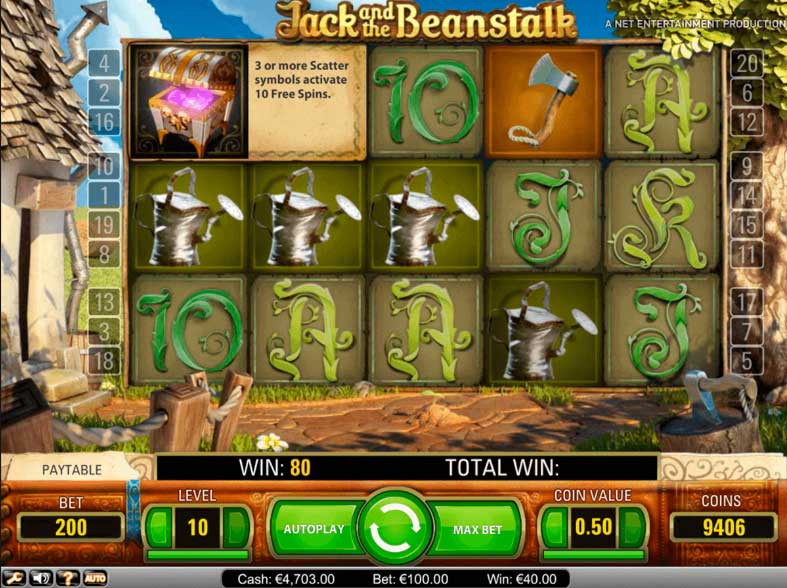 Jack and the Beanstalk running on the NetEnt software offers players a fairytale change of scoring some generous prizes. This fairy-themed game comes packed with 5 reels and 20 paylines boasting plenty of lucrative bonuses for more generous prizes. As expected from one of the most prominent names in the industry, NetEnt did an amazing […]

Best Casinos to Play Jack and the Beanstalk for Real Money :

Jack and the Beanstalk running on the NetEnt software offers players a fairytale change of scoring some generous prizes. This fairy-themed game comes packed with 5 reels and 20 paylines boasting plenty of lucrative bonuses for more generous prizes. As expected from one of the most prominent names in the industry, NetEnt did an amazing job with the game. Jack and the Beanstalk is packed with remarkable 3D graphics, stunning visuals and delightful sound effects which provide a relaxing vibe to the gameplay. 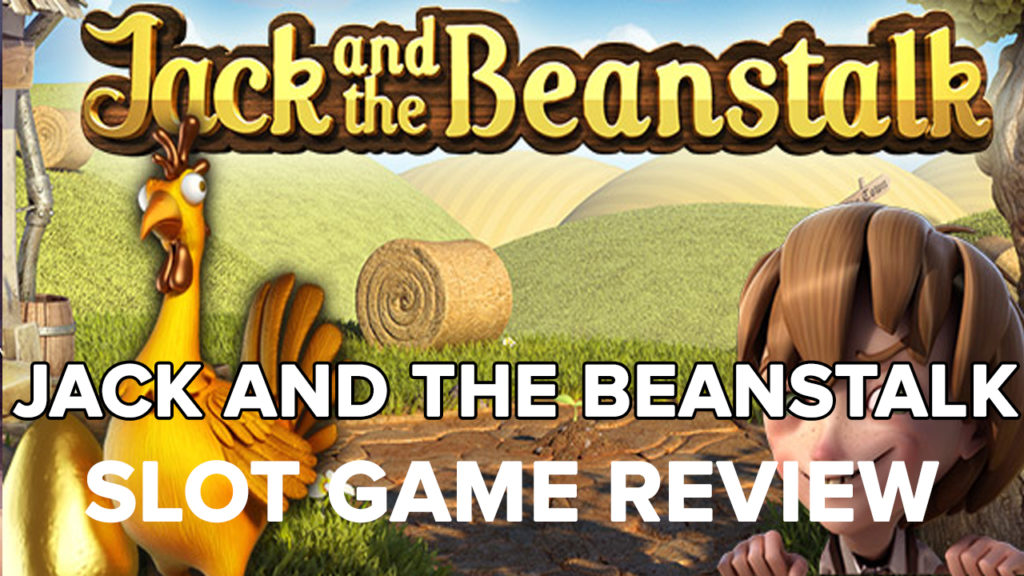 As expected from the game’s title, the game is inspired by one of the most popular children fairytales. It depicts a young boy Jack during his time at the giant’s castle. He just stole the giant’s golden-egg laying hen, so he is desperate to return home. However, the ugly giant catches him and holds him captive in his massive castle. Those players who decide to help Jack return home, get to enjoy great multipliers, lucrative Walking Wilds bonus mode, plenty of Free Spins and much more.

Easily Drawn into the Story 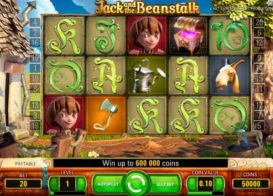 With its magical setting, the game offers a truly delightful both mobile and desktop gaming journey. This is one of those beautifully rendered games. It comes packed with remarkable 3D graphics, stunning visuals as well as very pleasant bird-chirping sound effects paying the background. With the game’s truly magnificent visual and audio solution, players are easily drawn into the story.

During their Jack and the Beanstalk gameplay, on the reels, players will come across butterflies flying around while the actual game’s reels are pack3ed with Jack himself, the purple giant, goats, watering cans, skinny cows, axes, and other. In addition to these higher-valued symbols, the game is also packed with neatly rendered, vine letters which act as the game’s lower-valued symbols. 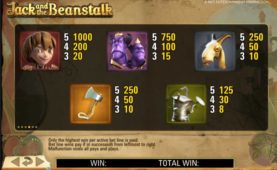 Everything in the game is most certainly impressive, from the game’s sounds to visuals. Based on one of those most popular classic fairytales, the game brings some magical winnings for sure. It is packed with lucrative bonuses such as plenty of Free Spins, an interesting Treasure Collection bonus mode as well as both Expanding and Stacked Wild symbols for more generous winnings.

As players hop on this magical journey, they should definitely pay attention to those game’s logo symbols as they act as the game’s Wilds. Due to their power of replacing regular symbols on the reels, they can bring more winnings. Another very important symbol is the game’s Scatter represented by the Treasure Chest symbols. Landing three or more of these symbols in any position on the reels activated the game’s Free Spins mode.

Once players get here, they are immediately awarded 10 Free Spins. Moreover, they can get five additional spins is they land three extra Scatters on the reels. This is not everything. The game is also packed with the Treasure Collection bonus mode during which players need to collect key in order to bring Expanding and Stacked Wild symbols to the reels. If players collect three keys, those next Wild symbols landed on the reels will turn into Stacked Wilds.

Moreover, if they collect three more keys which is total of six keys, those Wild symbols will turn into Golden Hens Stacked Wilds and finally if they collect three more keys totaling to nine, Wilds will become Expanding Wilds depicted by Golden Harp. With plenty of Wild symbols landed on the reels, players get to score more winnings as well as enjoy a greater winning potential.

In addition to these bonus modes, the game is also packed with the Walking Wilds bonus mode. When Walking Wilds land on any reels during the Jack and the Beanstalk base game or during the Free Spins mode, players get one Re-Spin. Then, these Wilds move one reel to the left bringing players more winning opportunities.

Moreover, players continue to receive Re-Spins for as long as the game’s Wild symbols are on the reels. The best thing about these Wilds is that they have a great 3x multiplier attached. In addition, during their Free Spins mode, players Wild winnings are always multiplied by three. This means that three is a great 1.500x your stake winnings available both during the Free Spins mode and the base game. With lucrative bonuses and plenty of winning opportunities, this fairytale journey most certainly offers magical winnings.

Jack and the Beanstalk running on the NetEnt software offers players a fairytale change of scoring some generous prizes. This fairy-themed game comes packed with 5 reels and 20 paylines boasting plenty of lucrative bonuses for more generous prizes. As expected from one of the most prominent names in the industry, NetEnt did an amazing […]

Hurray! There is a competition going between users of our site!
You have to do nothing, but browse out site, and win a daily prize. Click here to read more.
You current ranking:
Time Left: 6h 24m 51s