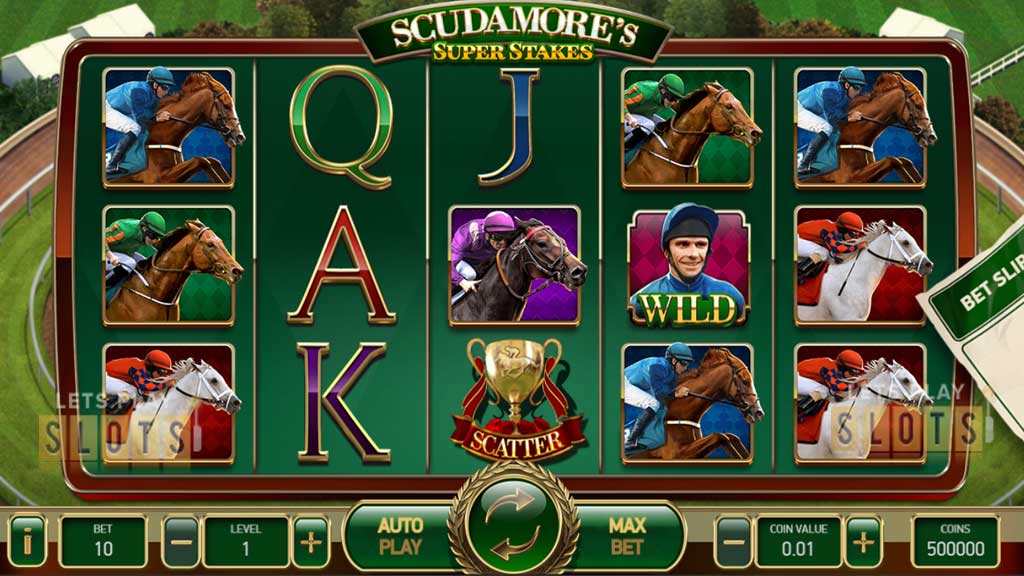 Strap on your hat and mount your horse with Peter Scudamore, in this online slot game from Netent. Scudamore’s Super Stakes takes you right to the racetrack, where you’ll get to experience a Wild symbol, Scatter addition, Peter’s Classic Cup feature and more.

I’ll admit – I’m quite derelict when it comes to knowledge of horse racing. I know a few basics, but beyond that, I’m fairly limited in what I can explain about it. Fortunately, it’s not entirely necessary to know that much with Scudamore’s Super Stakes from Netent. The game focuses on Peter Scudamore, the former eight-time Champion Jockey who rode 1,678 winning horses throughout his career. Yet, it’s also one heck of an online slot game, too! 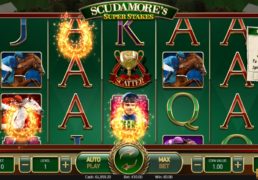 Accessing this slot will allow you to see a five-reel, three-row interface, which also has a set of 20 paylines running across it. The number of lines that are active isn’t something that you can change, but you do have the option of customising the bet that you place on them. This is done first of all by choosing a coin value between €0.01 and €1. After this, you select a bet level between one and 10 to reach a maximum overall bet of €100 per spin.

You can’t ever really bring into question the graphics that Netent uses. All of the developer’s games are of the highest quality, with Scudamore’s Super Stakes being no different. The symbols upon its reels begin with playing card additions running from J to A. Then come four symbols of Scudamore in action, with the highest of these displaying him in red attire. This one is able to provide maximum rewards of 250x your wager.

The close up shot of Scudamore acts as the game’s wild symbol, meaning that it can substitute for all other standard icons, helping you to create winning combinations. The wild is also able to reward you with pay-outs of up to 1,000x your bet. 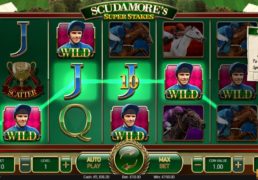 If there’s one other thing that Netent is known for, it’s including impressive specialities in its slots. And, as I discovered, this slot game doesn’t veer away from that. First of all, there’s the addition of the gold trophy symbol, which is the game’s scatter. This means that it can show up in any location and still reward you with a pay-out. If three scatters show up on reels one, three and five, then the Peter’s Classic Cup round activates.

In Peter’s Classic Cup, you need to select the winning horse to be able to win up to 5,000x your stake. This round sees the reels extend and every time you form a winning combination, the horse moves one step forward. The horse that is the first to advance four steps is the winner. These free spins will continue until a winning horse is found. Extra bet lines are also present during this round.

Something else that I really like about this game, is the inclusion of Random Wilds. During any base game spin, between two and five horseshoe symbols can randomly land on the reels and turn the symbols they’re on top of into wild symbols.

Finally, at the right-hand side of the reels, you’ll see a Bet Slip. This allows you to place a wager on a specific symbol in terms of how many times it will show up within the next specified number of spins. Make a correct bet and you’ll see your wager multiplied significantly. 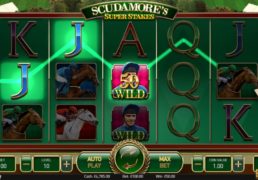 It’s definitely like a day out at the races with Scudamore’s Super Stakes, and I actually love playing it. Netent has created yet another exceptionally compelling online slot, which even appeals to players who have no real interest in horse racing. It has wonderful graphics and innovative inbuilt features, which should keep you entertained for a long period of time.

Strap on your hat and mount your horse with Peter Scudamore, in this online slot game from Netent. Scudamore’s Super Stakes takes you right to the racetrack, where you’ll get to experience a Wild symbol, Scatter addition, Peter’s Classic Cup feature and more.

Hurray! There is a competition going between users of our site!
You have to do nothing, but browse out site, and win a daily prize. Click here to read more.
You current ranking:
Time Left: 5h 34m 35s